Also in Russian.
Also in Polish
Also in Portuguese


Religion in the Cook Islands

THE DOMINANT religion of Polynesia and the Cook Islands is Christianity. The missionaries arrived in 1821 and quickly uprooted the old animistic worship of tribal gods and idols. Their success was much quicker than in the Marquesas and Society Islands. The London Missionary Society focussed its early efforts on the Society Islands. Ex-ironmonger John Williams hit on the idea of using converted Polynesians to spread the gospel to the islands to the west. 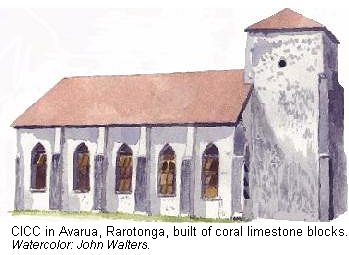 He sent two Raiateans to Aitutaki in 1821 and others followed shortly after to Mitiaro, Mangaia, Mauke and Atiu. Finally, Rarotonga fell to the new beliefs. The islanders probably identified the missionaries as bringers of all the material benefits they saw as being part of European civilisation. Nonetheless, it is curious that they became such quick and eager converts. The missionaries faced the hostility of European sailors and traders but pressed on with their task of wiping out cannibalism, infanticide and idol worship. Missionaries are responsible for many negative aspects of life in Polynesia but without them there would have been no schools and no written form of the Rarotongan language.
There is no suggestion that missionaries in the Cook Islands used their influence for personal ends as occurred in other parts of the world. Despite the arrival of new fundamentalist sects and religions mainly from the USA, the established churches still maintain a strong grip on the life of the average Cook Islander. Any politician seeking the popular vote is well-advised to put in plenty of church "time". Church membership is essential for those who wish to exercise power or to influence the community. Missionaries had a huge impact on the land, structure of society and the people. Most of them came from the lower middle classes of 19th century England, what has been termed the "mechanic" class. They brought their wives with them. Many of these women were the daughters of missionaries in New South Wales, Australia, and were well aware of the hardships of missionary life. The islanders were employed by these families around the mission houses to cook, clean, wait at table and work in the garden. 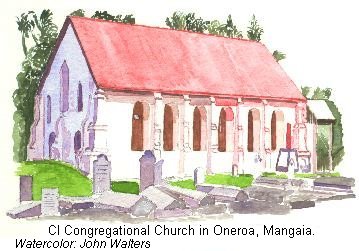 It is reasonable to assume that the relationship between the mission families and their servants mirrored the general attitude of missionaries towards the people, in other words, they looked on the islanders as children who needed to be schooled in the ways of the Lord.
The missionaries influenced the traditional gender roles of Cook Island women by treating them as equal with the island men. Throughout the latter part of the 19th century less importance was put on authority figures being solely male and some women became more influential in the public sphere.
Other crucial changes effected by the missionaries included the way in which the people were governed. The traditional tribal system where hereditary chiefs were in control was gradually replaced by a centralised form of government under elected politicians. Another important change was the concept of a cash economy which replaced the traditional barter system. Also, the missionaries introduced calico cotton. This, being cheap, plentiful and easily produced, replaced the traditional tapa as garments. Calico led to the skills of sewing for clothing, bedding and house furnishings. Agriculture also changed because of the missionaries. Plantations replaced subsistence farming and hundreds of new acres began to be farmed.
Father Don Manning, the ex-parish priest of Aitutaki, wrote in 1997:-

'The London Missionary Society is not to be confused with the Church Missionary Society which worked in other parts of the Pacific. The LMS was a conglomerate of the theories of its leaders and is at the 'Congregational' end of the spectrum of Protestantism. Although the early missionaries insisted on long dresses for the women and trousers for the men, they encouraged their traditional singing. This is known as the 'Imene Tuki' and is idiosyncratic and particular to the Cook Islands. It is strongly harmonious and sung in parts with the interjection of the guttural sounds of the men. Most of the tunes are traditional and go back beyond living memory.
'The words used are made up by each generation although some have stood the test of time. In fact, from when Cook Islanders are very young, they know the rhythms and tunes well. There are often classes in singing which are dominated by the elders and many of the imene (hymns) are songs about the past and about the local village as well as songs of praise.
'Luncheons being served after the service is not a universal practice but is becoming more popular on Rarotonga specially as the church people feel grateful for the money that visitors put into the collection baskets. Women are still not given the job as pastors but they often take the lion's share of all the other leadership roles.' 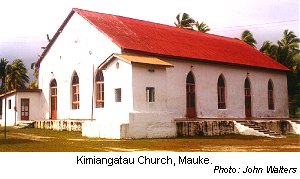 Before contact with missionaries, the Rarotongans lived inland deep in the valleys and thus protected from neighboring tribes. However, the location of these settlements did not suit the missionaries' attempts at conversion since access was difficult and restrictive. The missionaries set up their stations on the coast and persuaded the chiefs to build villages around them. Housing was changed to suit a nuclear family unit instead of the previous communal extended-family living arrangements. On Atiu, precisely the reverse situation obtained, since the people were persuaded to move up onto the central plateau.
The missionaries of the London Missionary Society who served in the Cook Islands were:-