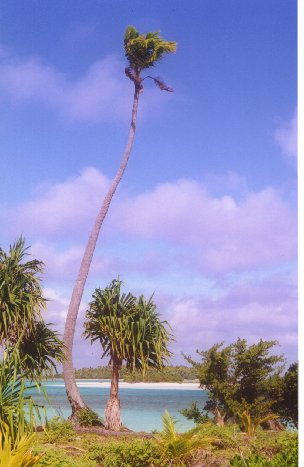 A FINE rain falls - La Nińa has brought unseasonably wet weather to the southern Cooks this winter. The air temperature is warm but huge grey clouds blow swiftly in off the sea. Like many of the outer islands of the Cooks group, Aitutaki is a horizontal world. But here almost everything consists of water. Wherever you stand you have a view of the sea and sky. As you turn through 360 degrees, all the lines of the land and sea are parallel with the horizon where the sky meets the sea. The endless lagoon is a continually changing palette of blues, greens and greys. The nearest horizon is the encircling reef. Far away the Pacific Ocean merges with the sky, a vast bowl uncluttered by pylons, cables or smoke.
For many years before a runway capable of taking international aircraft was built on Rarotonga in the 1970s, Aitutaki was the stopping point for trans-Pacific air passengers on the Coral Route to New Zealand. In those days Air New Zealand used Sunderland flying boats to island hop across the Pacific and Aitutaki's giant lagoon was an ideal landing place.

The big old church in Arutanga looks a bit worse for wear with black mould growing over the coral limestone walls on its westward side. The missionaries taught the islanders to burn crushed coral to make lime for their churches of coral blocks. They used the same technique to construct cottages. But these structures suffer from the perennial tropical humidity of the islands and become fecund breeding grounds for the ferocious black moulds which thrive on the limestone.
Aitutaki has eagerly adopted the new Government policies of decentralised control and is now making its own decisions on most aspects of its future development. However, despite a regular flow of day trippers and tourists there is small evidence of much tourist industry income trickling down to the average Aitutakian. The houses are generally down-at-heel, there are few jobs and the island's young people are still leaving for the bright lights of Australia and New Zealand.
The markets in the main village of Arutanga sell pareus, tee shirts, bottles of coconut oil and crudely carved artifacts for the tourist market. But there are few customers.
The high point of any visit to Aitutaki is a lagoon cruise. Several operators run these and most boats go to Tapuatae, One Foot Island, at the far south-eastern corner of the huge lagoon. This was once a pristine 'motu' or islet used solely for a quick picnic lunch for tourists, a walk across to the reef side of the island and some snorkelling in the channel at its north-eastern extremity. However, there is little in the way of interesting coral heads or fish in the immediate area. Keen snorkellers need to go much further east towards the reef before the coral begins to compare with that in Rarotonga's southern lagoon. However, the diving is excellent and the fish plentiful in the best spots.

Sad to say, there are now three man-made structures on One Foot Island. The largest is a combination eating area, bar and souvenir shop which doubles as a post office. The other two buildings are week-end cabins erected no doubt by wealthy Aitutakians in need of escape from the stresses of making a living from tourism. The other 'motu' around the periphery of the lagoon continue to enjoy solitude and freedom from commercial depredation. They are well worth a visit.

A new tourist vessel has arrived recently, a double hulled catamaran jollied up to resemble one of the traditional ocean-going voyaging canoes used by old time Polynesians to cross the Pacific.

The skipper uses a conch shell to summon his passengers and the boat provides day trippers from Rarotonga with a one-stop experience, transporting them across the magical lagoon, protecting them from wind and spray with plastic roll-down window flaps and feeding them on the boat even while drawn up on One Foot's beach. The big advantage of this self-contained approach is the environmental protection it affords to the island with no consequent litter or pollution since everything is kept on board.
Night life on Aitutaki is the traditional Cook Islands dancing performed at the customary 'island nights' at various locations. Air Rarotonga flies regularly to Aitutaki. The airline also runs packages which include accommodation. A list of accommodation is at Accommodation.
Back to Aitutaki.